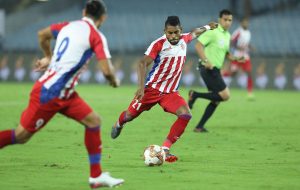 The most exhilarating part of football matches is the scoring of goals and the build-up behind it. With a new season already underway, clubs will be looking to have a successful new season. Let us have a look at our pick of the 3 best-attacking trios in the ISL 2019.

The defending champions will be looking to have a similar season in the league this year as well. Miku was their stand-out performer the previous season, and to emulate a similar result without him will certainly be difficult. In response to the situation at hand, the club managed to get the services of Manuel Onwu during the transfer window.

Along with the Spanish forward, Sunil Chettri and Udanta Singh will be responsible for finding the back of the net this season. Chettri is India’s record goal-scorer and will be looking to have another stellar season. Udanta Singh will also be striving to score more goals and provide some in the upcoming days. Both the Indian forwards will have the international break in mind as well. If both of them hit prime form before the break, the national side would reap the benefits in the International qualifier.

Probably the biggest swoop of this season’s transfer window, star striker from Fiji, Roy Krishna has been roped in by ATK for the upcoming season. This former A-League golden boot winner will pair up with Edu Garcia and Komal Thatal upfront in search of goals this season.

Komal Thatal, now a well-known player in India, will be looking to find glory for himself as well as for his club in the upcoming season. Garcia will be looking to create an impact in India after his brief stint in China last season, scoring 4 goals in 18 matches he played.

Bartholomew Ogbeche, Mohammed Rafi and Messi Bouli will be Kerala’s preferred 3 striking options for the 2019-20 season of the ISL. Bartholomew Ogbeche rose to fame last season when he scored 12 goals for NorthEast United. His impact was such that the club managed to reach the semi-final of the league. This was NorthEast United’s best performance in the ISL since the league’s inception. Keeping the striker’s performance in mind, Kerala brought in Ogbeche to refresh their squad for the upcoming season.

Along with Ogbeche, Messi Bouli will be donning the yellow jersey this season. This new recruit from Cameroon is an exciting prospect for the Indian Super League. He shall remain the subject of interest this season for the number of goals he scores as well as for the number of assists he manages to provide by the end of the season.

Mohammed Rafi, the seasoned Indian striker will be the third and final striker to represent Kerala in this upcoming season. How he performs shall decide his selection to the national side for the international break as well as for future international matches.